Built environment firms have welcomed the government’s plans to provide billions in funding to improve the energy efficiency of homes but said more detail is needed on how it will be spent.

Chancellor Jeremy Hunt today said £6bn will be set aside to drive the work between 2025 and 2028 as part of the government’s announcements in the autumn statement.

It will follow £6.6bn which has already been promised for the lifetime of the current parliament. A new energy efficiency taskforce will also be launched with further details on the plans due to be announced by housing secretary Michael Gove “shortly”. 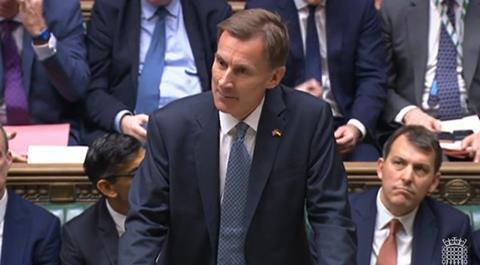 Climate charity Ashden said it was pleased the government had recognised the importance of retrofitting homes at scale in tackling the energy and climate crises, but that the success of the policy depended on there being enough people trained to do the work.

The organisation’s policy and impact lead Fiona Duggan called on the government to set out and finance a clear long-term retrofit policy which addresses skills shortages and empower local authorities.

“To ensure energy efficiency funding can be used rapidly and efficiently, we must urgently train thousands of UK retrofitters to deliver low cost, low carbon solutions, including insulation and heat pump installation, as part of a comprehensive green skills strategy,” she said.

“The worst-case scenario would be public sector entities having to hand back government funding because they cannot find enough skilled retrofitters to carry out the required volume of work.”

Federation of Master Builders chief executive Brian Berry applauded the additional funding but said that more would be needed to retrofit the 17 million homes in the UK which need to be made more efficient.

Ben Derbyshire, chair of architect HTA Design, said the investment was a “no brainer” for countering energy poverty but that it should have come sooner.

Hunt said the government remains committed to the government’s target to reduce the UK’s carbon emissions by 68% by 2030, and announced a new national ambition to reduce the energy consumption by buildings and industry by 15% within the same timeframe.

The chancellor said the contract for the initial investment will be signed with relevant parties, including energy provider EDF, within the coming weeks.