A lawyer for Arconic has told the Grenfell Inquiry there is an “agenda” against his client and hit back at claims its fire safety certification for its aluminium composite material (ACM) cladding was misleading.

Arconic, which manufactured cladding used on Grenfell, was yesterday named first in a ‘ranking’ of firms responsible for the 2017 tragedy by a lawyer representing bereaved families and survivors. 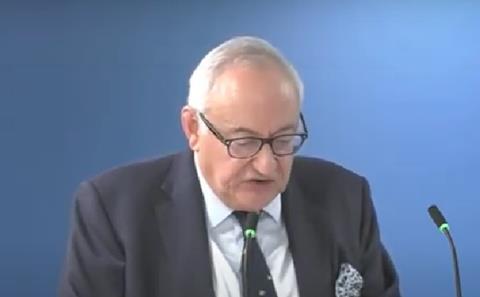 Arconic has been accused of concealing the results of a fire safety test of its Reynobond PE cladding used in a folded version of the product, known as cassettes – as opposed to the riveted form of the product – from the British Board of Agrement in order to obtain a certificate for both forms of use.

However, Stephen Hockman, KC, speaking at the inquiry yesterday, said: “It has sometimes seemed to our clients that there has been an agenda throughout to subject them to condemnation even before the case has been fully heard.”

He said: “The BBA certificate, read as a whole, as it must be, not only makes it crystal clear that the product was combustible, but also contains explicit limitations or disclaimers as to the extent to which a purchaser can use the product in a particular architectural context without himself taking responsibility for testing and checking that it is suitable.”

He added that if those concerned in the refurbishment project assumed that ACM panels were suitable, regardless of issues such as the fixing method, type of insulation “that is an approach for which they must be held responsible”.

Geraint Webb KC representing insulation manufacturer Kingspan, pointed to test results from inquiry expert Professor Luke Bisby to argue that the cause of the rapid fire spread was ACM, not insulation.

Webb said: “All of the expert evidence is consistent: the type of insulation made no material difference to the speed and spread of the fire.”

Other firms criticised during the inquiry also made their case yesterday.

>> See also: Decay, delay and deregulation: what we have learnt from the Grenfell Inquiry

He said: “It was not Harley who were the architects charged with producing a compliant design, including the selection of safe products; neither were they the fire engineers. “

He said Harley was entitled to rely on architect Studio E and fire engineer Exova to “discharge this pivotal role.”

He said: “The panel may reasonably consider that there is no cogent and reliable factual connection between any act or omission on the part of PSB and the injurious spread of smoke on the night of the fire.”